Mayor of Freetown Meets with Dr. Jane Goodall, the World’s Most Foremost Expert on Chimpanzees 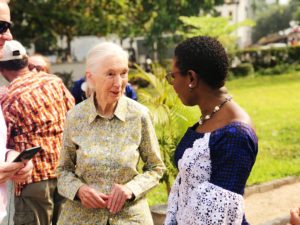 Today, Mayor Aki-Sawyerr met with Dr. Jane Goodall, renowned anthropologist, environmentalist and U.N Messenger of Peace, in Freetown. The meeting started with a tree-planting exercise at the Taylor-Cummings Garden, next to the Cotton Tree. Five trees were planted by Her Worship the Mayor of Freetown, Yvonne Aki-Sawyerr; Dr. Jane Goodall; the Founder & Director of Tacugama Chimpanzee Sanctuary, Mr Bala Amarasekaran; the Country Director of British Council in Sierra Leone, Tony Reilly, and the Irish Ambassador to Sierra Leone, Ambassador Catherine Campbell. 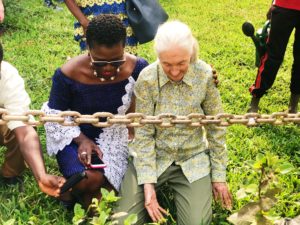 Speaking to the media at the event, Dr. Goodall stressed on the need for maintaining vegetation cover. “It is very important to save the forests for the future of the people. Forests give us clean water, clean air, absorb carbon dioxide and are one of the surest ways to prevent climate change,” says Madam Goodall.

She explained that she is in Freetown to visit the Tacugama Chimpanzee Sanctuary. She played an instrumental role in the founding of the sanctuary, which she now describes as “probably the best chimpanzee sanctuary in Africa”. She mentioned that she is meeting with the Mayor because they are both committed to the same cause – environmental protection. 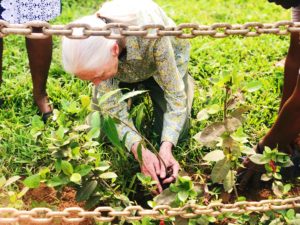 The Mayor reiterated Dr. Goodall’s view that sound environmental management is a must, stating that “when we preserve the environment, particularly the forest & trees, we are investing in the future of the planet and, to bring it home, our city.”

The Mayor proceeded to mention several ways she is delivering on her promise to protect the environment in Freetown. For one, the Council has prioritized environmental management in her plan to Transform Freetown, and the Council has set itself a target of to increase vegetation cover in Freetown by 50%. 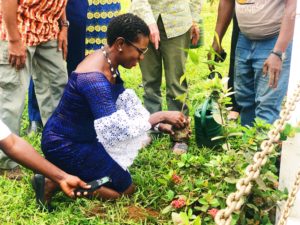 “Planting the trees today is symbolic. It is just the start of what we intend to do. On 20th of June, we are going to be having a huge tree-planting exercise, closer to the rainy season because we want to make sure what we are planting has the greatest chance of success. We are not working in isolation; we have many partners including the EPA, NPAA, & the Ministry of Agriculture,” the Mayor explains.

The Council’s plans also include beautification efforts and the Mayor disclosed that several areas around the city, including the Aberdeen Roundabout, will be getting a makeover over the next few months. The Taylor Cummings Garden, where the meeting with Dr. Jane Goodall took place, is a testament of the Council’s work so far. “Just a few months ago, this garden was just a rundown part of the city. We have brought it to life. It does not only look good; it is good,” says Mayor Aki-Sawyerr. 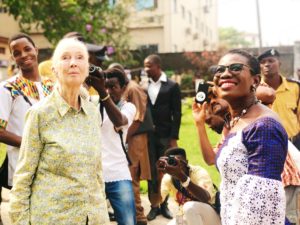 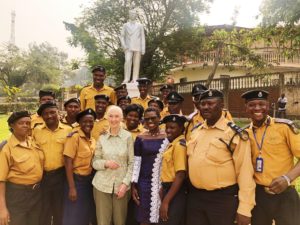 The Mayor emphasized that making Freetown environmentally-friendly is not the job of the Council alone and expressed her appreciation for the enthusiasm with several individuals and companies and come on-board and helped.

Immediately after addressing the media, Her Worship the Mayor & Dr. Goodall made a quick stop at the Sierra  Leone Museum, before making their way to British Council in a march-past, together with hundreds of school children that are members of nature clubs across Freetown. 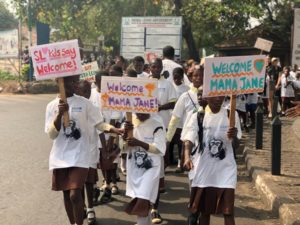 There was a short forum at the British Council Hall, during which the Mayor formally announced the UNICEF-sponsored partnership between Tacugama Chimpanzee Sanctuary & Jane Goodall Institute’s Roots & Shoots Program. The Mayor shared her excitement about the partnership as it will enable more children around Freetown to learn and get excited about the environment and they will play a part in saving the chimpanzees and the environment. This ultimately will support the Freetown City Council’s work protecting the environment. 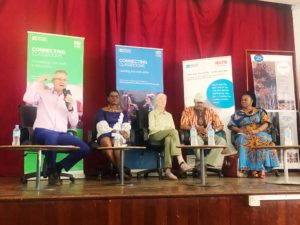 The Director, British Council; The Founder, Tacugama Chimpanzee Sanctuary & a representative from the Environment Protection Agency also delivered short speeches. Dr. Goodall gave the keynote speech, detailing her journey as a conservationist, the challenges she faced, and what is expected of the students that will be enrolled in the three-year  Jane Goodall Institute’s Roots & Shoots Program. 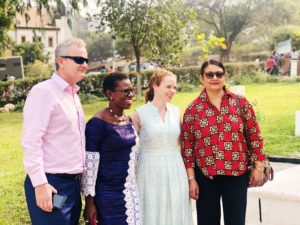