This week, Mayor of Freetown, Yvonne Aki-Sawyerr, OBE, travelled to Paris, France to attend and participate in the third Women4Climate Conference, organised by C40 Cities, which is a network of over 90 of the world’s mega-cities committed to tackling climate change.

The Women4Climate Initiative works to inspire and empower young women and raise awareness about the disproportionate impact climate change has on women around the world. The Conference brings together female mayors, business leaders & change makers to discuss and find solutions to the impact of climate change at local and global level. It provides a critical platform for a unique cross-section of powerful women – and men – to advance a shared agenda that spans education, innovation, and social equality

At the Conference, the Mayor of Freetown participated in a panel discussion, whose theme was “It Starts at Home:  Transforming where we live, work & play to drive inclusive change in our cities”. The discussion explored the importance of climate action at the local level, focusing on driving change that is inclusive of all residents and citizens. 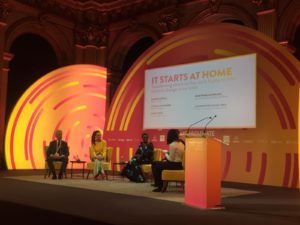 The Mayor of Freetown highlighted the major challenges facing Freetown to give a context to her approach to solving environmental, and by association, climate change issues. High population growth rate in Freetown translates into environmental challenges associated with limited land supply for housing. “This, inevitably means pressure on the land and sea, and the result is that Freetown now has 35% of its population living in informal communities, otherwise known as slums. They are they most vulnerable to climate change because when it rains, they are most likely affected by floods and other environmental disasters. This is why we, very tragically, experienced on 24th august 2017 a landslide in which 1000 people die in 3 minutes.”

The Mayor then expanded on her approach to inclusive change, the Transform Freetown Plan, which she revealed prioritizes the environment and community involvement. “We started off in my first few months engaging with 15000 one on one, face to face in town hall meetings. We have also pulled together multi stakeholder groups from ministries, development partners, NGOs and, most importantly, from community. What we are doing is when it comes to our 11 priority sectors, we are building resilience in communities, community involvement in risk mapping to understand their vulnerabilities and make specific plans to tackle them. We also have a specific target to increase the vegetation in the city by 50%. We are going to build at least 5000 housing units as housing is a big driver. It might sound like nothing, but in Freetown it is huge, because there has never been a building plan in Freetown in before.”

To conclude, the Mayor shared the Cleanest Zone Competition, which is the initiative she is “really most excited about” in the Transform Freetown Plan. The Competition ensures that the benefits of sound sanitation and environmental practices are reaped sooner than later by rewarding residents with infrastructural upgrades. According to the Mayor, “What really has made this so special is that the prizes are significant enough to actually change the physical infrastructure o a zone as well as touch on things, which women are particularly interested in.” Prizes for the winning zone are solar street lights, one water point, one 250 meters of paved roads, made from recycled plastic dallettes and education sponsorship for ten pupils. 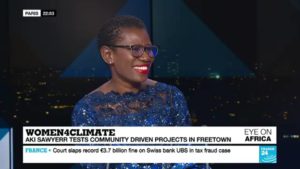 Mayor Aki-Sawyerr was also featured on France 24 and Radio France International, two of France’s leading broadcasters, where she discussed some of the exciting projects the Freetown City Council is undertaking in Freetown.