The Mayor, Councillors and Staff of Port Loko City Council were recently hosted by the Freetown City Council during a one day retreat.

The aim was to share some of the strategies in our Transform Freetown Agenda that will be beneficial to the newly-formed Council. In particular, our staff and Councillors explained processes in our revenue mobilization, job creation and sanitation sectors,which are some of FCC’s key priorities that can prove useful to the Port Loko City Council.

Making the opening statement at the retreat, Mayor Yvonne Aki-Sawyerr explained, “This retreat is part of our commitment to support other Councils in their efforts to develop their cities. We developed Transform Freetown to help improve service delivery to our residents and we recognize that not all of what is important to a city of 1.2 million people will be be important to a city of 47,000. That is why we have chosen to share key areas of mutual interest that will be most helpful.”

The Chief Administrator of Port Loko City Council made a statement shortly after, detailing how the Council’s administration has steered its affairs from conception until now and what the goals, in their city development plan are.

The Chief Administrator of the Freetown City Council, Festus Kallay, who previously was the Finance Officer at Port Loko City Council provided insight into the day to day operations of our Council. 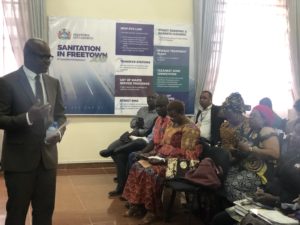 At the end of the retreat, Mayors of both the Freetown City Council and Port Loko City Council led a discussion session, where key next steps were agreed on.