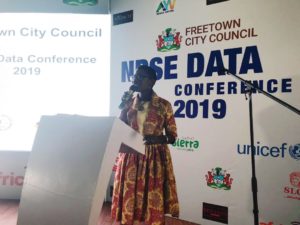 Yesterday, 12th September, 2019, Freetown City Council (FCC) had in-depth discussions with stakeholders in education, about some of the irregularities our monitors observed during the May 2019 National Primary School Examination (NPSE). The discussions happened during a conference that was held at the Miatta Conference Hall, Brookfields, under the distinguished patronage of the Minister of Basic and Secondary School Education (MBSSE), Hon. Apha Timbo. Other stakeholder present were teachers and heads of primary schools in Freetown, representatives from the West African Examinations Council (WAEC), United Nations Children’s Fund (UNICEF), Directorate of Science, Technology and Innovation (DSTI), Statistics Sierra Leone (Stats SL), National Civil Registration Authority (NCRA). 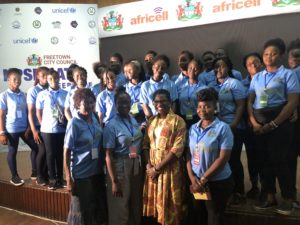 As part of its Transform Freetown Agenda, FCC set itself a target to ensure that by 2022 100% of all students who take public exams in the Freetown Municipality do so in transparent and credible conditions. This was done against the backdrop that the Local Government Act of 2004 had devolved basic education (primary and junior secondary schools) to all local councils. As  a first step towards assuming its responsibilities and achieve its target, FCC undertook the monitoring of the NPSE. There were two goals for the monitoring exercise – limit malpractices in the exams and collect data on how to better organize the Education Department at FCC to handle its responsibilities.

In March 2019, FCC, with funding from UNICEF, trained 150 monitors on what the processes before, during and after the NPSE should be ideally. These processes and procedures included script receipt and dispatch procedures, and the duties of all staff, including supervisors, invigilators and security. With great support from the Ministry of Basic & Senior Secondary Education (MBSSE) & WAEC, teams of monitors observed the exams in nine centers and the processes that followed immediately after. All teams of monitor produced detailed reports of their observations on the environment, comportment of candidates, presence of unauthorized persons, irregular candidates and conduct of the examinations.

Several stakeholders have expressed interest in implementing solutions to some of the problems presented. For instance, Freetown City Council & the National Civil Registration will work on solving one of the key issues identified – unregistered students turning up for the exams – by registering of pupils as early as in class 5. This process would reduce the final exam registration process to a confirmation process, and it would provide a database for cross-referencing pupils who turn up for the NPSE.

FCC will also look into implementing other simple reforms like providing the good quality pencils for exam candidates, as it was found out that poor quality pencils used for shading could not be identified by the machines that mark the answer sheets – an issue that significantly slowed down the marking process. Several partners also agreed to look into training teachers on the marking schemes and methods WAEC uses to grade exams.

We are happy that we were given the opportunity to work closely with MBSSE, WAEC, UNICEF, Stats SL, DSTI, & NCRA to map out the way forward for basic education in our city, and that we got feedback from the teachers and head teachers who work with the pupils!