The Mayor of Freetown, Yvonne Aki-Sawyerr on Tuesday 25th September, 2018 was among a select panel of speakers at the United Nations General Assembly’s Fight Against Plastic Pollution Event in New York

The event was hosted by Erik Solheim, the Executive Director of the United Nations Environment Programme and Frank Timmermans, the First Vice-President of the European Commission. 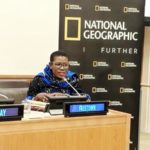 In her statement, Yvonne Aki-Sawyerr, said, “It is clear that fighting plastic pollution is a global problem that requires international collaboration to support national efforts; local governments in turn have a significant role to play”.

She noted that the focus in Freetown is on improving the efficiency and coverage of household waste collection; introducing waste separation at source; facilitating the establishment of more recycling businesses; improving the waste disposal sites and fostering greater community participation through the Cleanest Zone in Freetown Competition, which will be launched in early October.”

In concluding Mayor Aki-Sawyerr recognized that although the challenges posed by global plastic pollution are significant, if international, national and local players work together, we will make a difference. 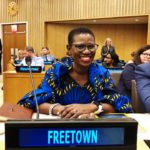 The FCC is working closely with the Environmental Protection Agency and all other stakeholders in the Sanitation and Environmental Management sectors.