On 26th July 2019, Freetown City Council (FCC) signed an agreement with the Government of Sierra Leone (GoSL), which stipulates that the central government will fund the implementation of the second phase of FCC’s Flood Mitigation Plan. The agreement was officially signed at the Ministry of Finance, George Street, by Her Worship the Mayor of Freetown, Yvonne Aki-Sawyerr and the Minister of Finance, Jacob Jusu Saffa, in the presence of other stakeholders including RSLAF & ONS

The agreement to fund FCC’s Flood Mitigation Plan comes after several engagements between FCC and GoSL, which was represented by the Ministries of Works and Finance, during which the Council presented a detailed plan on activities it will undertake to reduce the occurrence and impact of flooding in Freetown. In the agreement, FCC working in collaboration with RSLAF and ONS and with supervision from SLRA, will clear 62 locations that are likely to experience flooding during the rainy season, starting Sunday 28th July, 2019. The activities include clearing and desilting gutters, drainages, culverts and waterways across the city, engaging communities to increase awareness of risks and undertaking some urgent remedial work. 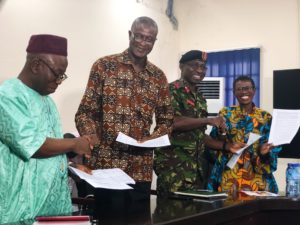 The Flood Mitigation Activities are part of the Disaster Risk Reduction component of the Environmental Management Sector in FCC’s Transform Freetown Agenda. The activities were first undertaken in June 2018, immediately after Mayor Aki-Sawyerr took office as Mayor of Freetown, in preparation of the 2018 rainy season. The topography of Freetown is such that the flow of the natural waterways from upstream severely impact major roads further downstream in the city. The situation has been worsened by lack of proper urban planning as the city creeps closer to mountaintops. Indiscriminate building of properties in the path of natural waterways and lack of proper waste management services uphill mean garbage and loose gravel as a result of the loss of tree cover block drainages and water escapes into communities along the way.

In 2018, FCC’s Flood Mitigation activities were undertaken in two phases. The former covered 34 flash flood points in 15 days whilst the latter covered 16 additional locations in 10 days. Work was done 23 of the 48 wards in Freetown, 29 waterways were cleared, 20 bridges cleaned, 35 culverts desilted and 6.24 kilometers of gutters excavated. As a result of the 2018 Flood Mitigation Activities, Kroo Bay, a slum community in the heart ofFreetown, did not experience flooding for the first time in years. 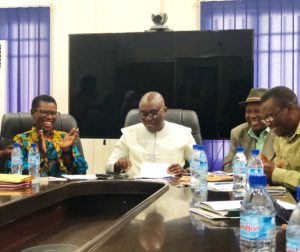 In the first week of April 2019, FCC, together with RSLAF and the Community Disaster Management Committees in the various wards, conducted an assessment of flood prone areas and mapped the level of flooding risk. Fifty-two areas with a high risk of flooding were deemed as high priority and they formed part of the first phase of the 2019 Flood Mitigation activities. This phase lasted from May 20th to June 9th 2019 and it was funded by  Road Maintenance Fund Administration (RMFA), Irish Aid & FCC. Some of the areas included Kekeh Garage (Black Hall Road), Benz Garage (Wilkinson Road), Amadu Lane (Lumley), Pademba Road – Dwozark Junction and Kissy Road.

FCC’s Flood Mitigation Activities are complemented by another Environmental Management Initiative – a tree planting exercise in upper catchment areas. FCC aims to increase vegetation cover in Freetown by 50% by 2022, and FCC will plant over 20,000 trees across the city by the end of the year.

FCC is grateful for the financial support, which is absolutely critical as we seek to transform Freetown.