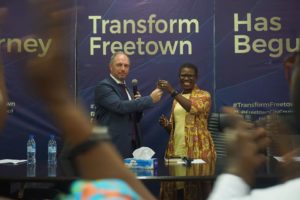 This morning, sixty youth groups, who are beneficiaries of Freetown City Council’s Sustainable Waste Management Project, received their tricycles and other sanitation tools, including shovels and wheelbarrows at the Council’s premises. The project was funded by the European Union (EU) and Freetown City Council is providing training, mentorship and monitoring to ensure that the 600 youth, who make up the youth groups, run waste management businesses.

Representing the EU, was Ambassador Tom Vens, who symbolically handed the tricycles to Mayor Aki-Sawyerr OBE, in the presence of councillors, staff and beneficiaries in the Mayor’s Parlour. The donation indicates the EU endorsement and consistent support of the Transform Freetown Agenda and Freetown City Council’s commitment to improving waste management in Freetown. 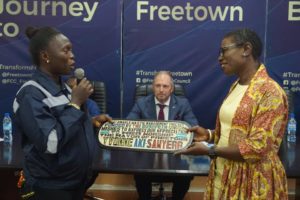 Addressing all present, Ambassador Tom Vens made his admiration of the efforts of the FCC overtly clear – sharing a touching story of his sons disappointment when they arrived in Freetown two years ago after observing the poor state of sanitation in the city. He concluded his speech by acknowledging the Mayor’s dedication to transforming Freetown, encouraging the beneficiaries to maintain their collaborative efforts to keep the streets of Freetown clean, and expressing his pride in playing a part in changing the narrative around Freetown’s sanitation story. 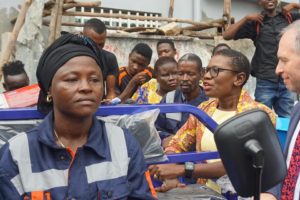 Mayor Yvonne Aki-Saywerr OBE, in her response, thanked the EU Ambassador for the generous contribution to the Transform Freetown Agenda. Mayor Aki Sawyerr directed the bulk of her message to the beneficiaries of the project, emphasizing on the importance of the work of the youth groups in preventing Freetown’s residents from throwing garbage on the streets, in the gutters and streams. The Mayor also encouraged the youth groups to persevere through the challenges they will face as entrepreneurs as their success will help to transform Freetown. The Mayor reminded the youth groups that the tricycles are properties of the Council and that the tricycles will be taken back from the youth if they are misused. The Mayor ended by asking that the youth collaborate with Councillors ad become ambassadors for sanitation on behalf of the Council to their customers. 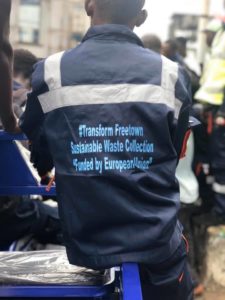 The handing over ceremony ended with a short thank you message from Councillor Abu Turay, which was closely followed by an inspection of the tricycles and interaction with the beneficiaries. FFC thanks the EU for its consistent support of FFC and looks forward to maintaining its strong relationship in the future.