The Mayor of Freetown, Yvonne Aki-Sawyerr, was one of nearly 100 mayors from around the world who participated in the Global Parliament of Mayors’ (GPM) annual summit in Bristol, UK, from the 21st-23rd October, 2018.

During the summit, the mayors addressed key global challenges, which many cities experience at local level including migration, urban security and resilience, public health and harnessing technology, and innovation.

Mayors from Africa, Asia, Europe and the United States took part in the summit and agreed on a key set of priorities that can be used to influence international frameworks.

A full programme with mayors, representatives of city networks and international organisations as keynote speakers was created to help inform the debate between mayors. 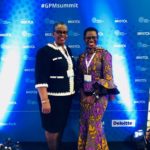 “It was an honour to take part in this year’s Global Parliament of Mayor’s summit. I was excited to add my voice to important issues affecting cities, using my experience as a city leader in Freetown to influence this international debate,” said Her Worship, Yvonne Aki-Sawyerr.

More information on the summit can be found on the Global Parliament of Mayors website (https://globalparliamentofmayors.org/), where people can also view the programme and a list of all of the participants.