World Malaria Day is internationally observed on 25th April each year. This year, Mayor of Freetown, Yvonne Aki-Sawyerr OBE, will join leaders from countries with high prevalence of malaria, international partners and decision makers at the “Zero Malaria Starts with Me!” Conference in Paris, the host city of this year’s World Malaria Day. 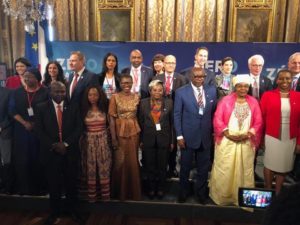 Mayor Aki-Sawyerr was invited to be part of a panel discussion where she shared how her Transform Freetown Agenda contributes to the fight against malaria at local level. Mayor Aki-Sawyerr’s Transform Freetown Plan has been applauded for taking an integrated approach to improve sanitation, which is key to controlling the breeding of mosquitoes that transmit malaria. With less than 25% of solid waste and 10% of liquid waste properly disposed off currently in Freetown, poor sanitation is a major contributing factor to the prevalence of malaria. Consequently, Transform Freetown includes initiatives that aim to encourage individual and collective effort to work directly on sanitation issues, which is critical in the fight against malaria, and to ultimately create a healthier environment for all. 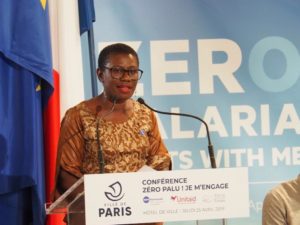 One key aspect of Mayor Aki-Sawyerr’s approach to improve sanitation is the Cleanest Zone Competition, whose success hinges on community ownership, just as the fight against against malaria does.The Competition encourages communities to develop and implement the solutions to sanitation challenges they face, by rewarding communities with the most improvement in cleaning, beautification, sustainability and innovation with infrastructural development. Launched in October 2018, the Competition will run every six months and the winner will receive prizes such as solar street lights, paved roads, water points and scholarships. Beyond this, the Competition aims to foster a culture in which every resident of Freetown feels personally responsible for the cleanliness of their neighbourhoods (and the city) in the long run.

The Freetown City Council (FCC) is also introducing an integrated waste management system for the first time in Freetown, which involves the registration of all waste collectors that meet FCC’s minimum criteria and enforcement of the use of council-registered waste collectors by all household at least once a week. This fosters individual responsibility to ensure that waste is properly disposed of. 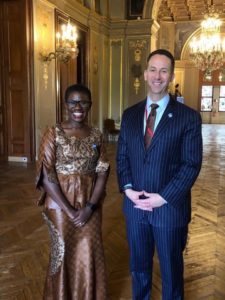 With malaria cases on the rise globally for the first time in a decade, World Malaria Day, which is jointly organized by the RBM Partnership to End Malaria and the World Health Organization (WHO), is a great opportunity to highlight efforts by local governments that contribute to ending the disease. The Conference provided Mayor Aki-Sawyerr the opportunity to hold three constructive bilateral meetings to share details of the Cleanest Zone Competition with Mr Peter Sands, Executive Director of the Global Fund to Fight AIDS, TB & Malaria; Professor Maha Taysir Barakat, Executive Board Chair of the Roll Back Malaria Partnership to End Malaria; and Dr Ken Staley, Coordinator, US President’s Malaria Initiative. 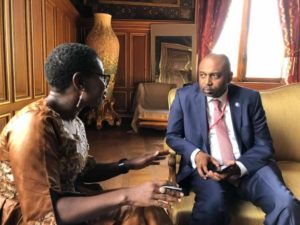 A “Zero Malaria Starts with Me!” campaign was simultaneously launched in Sierra Leone today by the Minister of Health and Sanitation. The campaign encourages everyone to make a personal commitment to a world free from malaria by taking the personal responsibility to protect their families from malaria – a challenge similar to that which Mayor Aki-Sawyerr has consistently thrown to the residents of Freetown to keep the city clean.