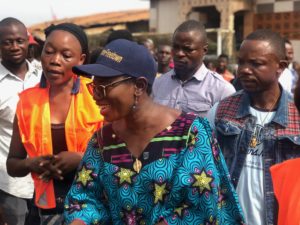 Throughout the weekend, Mayor Yvonne Aki-Sawyerr and a small team from the Freetown City Council continued their efforts to resettle members of the Kroo Bay & Susan’s Bay Communities that were affected by fire disasters two weeks ago. On Saturday, the Mayor shared the Council’s short and long term plans to over 400 households that were affected in both Kroo Bay and Susan’s Bay, and the donation of shelter kits to residents of Kroo Bay started on Sunday, in collaboration with CRS, Concern & ONS.

At Kroo Bay, the Mayor explained that the reconstruction will last a few weeks because the Council and its partners, including the Office of National Security, want the process to be as orderly as possible. “You have been divided into groups and each group has been given a specific time to be verified and to collect their shelter kits. Do not come for your materials when it is not your turn. When it is your turn, please show up and show up on time. We do not want any excuses,” urged the Mayor.

The Mayor went on to explain that the affected residents are expected to work as a team for all homes to be rebuilt as the supply of future relief items depends on the success of the current donation. She cautions, “Our ability to move fast depends on your willingness to do the right thing. Make sure you arrive on time, make sure that people who are not supposed to be at the construction site do not go there, do not give us wrong information to try to get more than what you deserve, report anything that seems to be going wrong and everyone should work as a team. If of all that happens, in a short space of time, Kroo Bay will get back to normal and, by God’s grace, we will engage with you over the coming months, so that by next year we will see some change in Kroo Bay.”

The Mayor informed the residents of the informal communities that in the long term, the Council wants to upgrade their communities, which will involve the relocation some residents. At Susan’s Bay, the Mayor explained, “We really need to work with the community, especially after the rainy season, to see how we can improve Susan’s Bay. You need to stop building two storey houses from zinc sheets without putting measures in place for evacuation during fires. We have to make regulations and planning on how to build.” She revealed that one possible way to upgrade the slum community would be to collaborate with organisations, like Home Leone, that are involved in the development of low-cost housing. “As Council, we will call on central government and other partners to see how we can work together to expand such projects so that you can also benefit from it.”

As the Mayor rounded up, she emphasized that the Council wants better for the community and from the community, especially on the issue of sanitation. She cited the example of a major drainage that passes through the community, which the Council had spent resources to clean up a few months ago but was now full of rubbish. “We will engage the people living where the drainage begins and put measures in place to stop them from dumping garbage in the drainage but I know that you also dump your garbage in that drainage. When I was here earlier in the week, I challenged you all to save money towards hiring waste collectors. The money you spend on curing malaria, typhoid, dysentery is far more than the money you will use to properly dispose of your waste.” She, however, promised to look into clearing it again before the rainy season starts to prevent flooding. 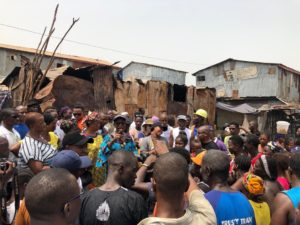 The communities were grateful for the fact that they were a priority to the Mayor and several individuals thanked the Mayor for the relief items as she interacted with them. Community representatives also addressed their fellow residents and encouraged them to report illegal electricity connections, which is the most common cause of fires in informal settlements like Kroo Bay and Susan’s Bay.

The distribution of the kits, which include zinc sheets, nails, cement , sand, sticks, and granite stones, started on Sunday at Kroo Bay. With great help from Councillor Murray Alie Conteh and the Community Disaster Management Committee, who mobilized other members of the community to carry materials, the Freetown City Council ensured that the first set of relief items were safely delivered to the site of the fire incident. The details of the distribution of kits at Susan’s Bay are still being finalized.