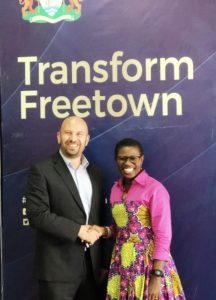 They had a lighthearted chat, which spanned various areas; from the Mayor’s priorities over the next three months to an overview of the #TransformFreetown Agenda to the Commissioner being a native of Kingston-Upon-Hull (Freetown’s twin city) to the Mayor being active on social media.

The British High Commissioner was particularly impressed with FCC’s findmeinfreetown.com where the list of registered waste service providers in Freetown is available for all residents – a key part of the Council’s efforts to improve sanitation in Freetown. 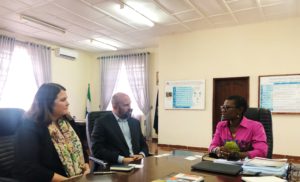 The British High Commissioner and the Head of DfID expressed keen interest in FCC’s Cleanest Zone Competition, and the initiatives in the Education and Health priority sectors.